Lasers are used in an amazing range of products and technologies, everything from CD and DVD players to dental drills. But our units are not one of them.

Infrared laser diodes and light-emitting diodes (also known as LEDs or IREDs) are widely used in displays and in TV remote control systems, and in toys. These LEDs are basically small light bulbs or flashlights. Instead of shining visible light, they emit invisible infrared light. Unlike incandescent lamps which emit light over a board range of wavelengths, LEDs emit light over a narrow bandwidth.

Worldwide, there is no report on eye injuries caused by incoherent diode emitters. Some confusion may result from the term “laser tag”. This phrase was coined back in the 1970s following the launch of the original Star Wars movie and the subsequent popularity of the sport of indoor laser tag. 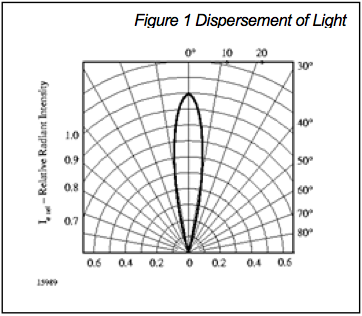 The use of the word ‘laser’ is simply a marketing term. Actually, the term “Laser” is an acronym for light amplification by stimulated emission of radiation. There are in fact no lasers used in the Conflict Colorado equipment. Rather we use infrared light. Infrared is a non-coherent light, similar to the sort of light that is produced the sun in much more massive quantities. It is coherent light that lasers produce which isn’t found in nature that is a potential danger.

As seen in Figure 1 [right] the light beam is not coherent – rather it is dispersed. It does not travel in a straight line. Rather the beam’s angle of half intensity is plus or minus 10 degrees.

There is more infrared emitted by the sun every second and our small, low level output from our units. This is proven by the fact that we need to darken a room in order to see our infrared pulse on an IR Camera, during the day.

The emitted by our units is incoherent. “Sources of incoherent light can be viewed safely because the light reaching the eye is only a small portion of the total output and the energy is spread over the entire retina.” (Source: http://www.ehss.vt.edu/Programs/OHIH/Laser/04_beam_hazards.htm)

Vishay, the manufacturer of the emitter states recent studies performed in the US showed that eye injuries (here: tests done on monkeys) due to even the brightest LEDs available are impossible.” (Source: http://www.vishay.com/docs/80089/80089.pdf)

Light waves come in many sizes. The size of a wave is measured as its wavelength, which is the distance between any two corresponding points on successive waves, usually peak-to-peak or trough-to-trough (Figure 1). The wavelengths of the light we can see range from 400 to 700 billionths of a meter also known as a nanometer (nm). But the full range of wavelengths included in the definition of electromagnetic radiation extends from one billionth of a meter, as in gamma rays, to centimeters and meters, as in radio waves. Light is one small part of the spectrum. (Source: How Stuff Works http://science.howstuffworks.com/light2.htm)

There is a spectrum of light. Visible light for example starts at red with the least amount of energy, and spreads out to violet which has the most energy.

Figure 2: Source: How Stuff Works
Lasers are categorized between Class I and Class IV depending on the amount of damage they can cause. According to Vishay’s documentation a standard application of the TSAL emitter is less than the Class I classification; which means, it is safe under all reasonable conditions. 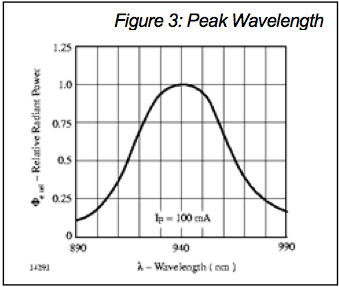 Our units are designed to operate at safe levels and do not
constitute any form of health hazard provided normal safety precautions are taken. They are NOT lasers and are not considered to be dangerous to the unshielded eye. However, as with any light source, we recommend that the user take precautions to avoid unnecessary exposure. For example if you can feel heat, take care to avoid staring into a light source.